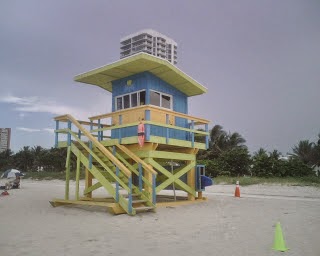 And finally I was ready to accomplish my sense of dwelling, approaching the yellow and blue shelter, ready to start creating that intimate universe where the memories are triggered by the perfect scale.

But my intuition sent me a bitter caveat, and suddenly behind my dreams, a big mass of concrete and steel made its bulky entrance. Again like other many times, again with the same voice, and effectively destroying my illusions.

Building behind the shelter.  Miami Beach.


Posted by Luigi Seta I djLuigi at 9:21 PM No comments: 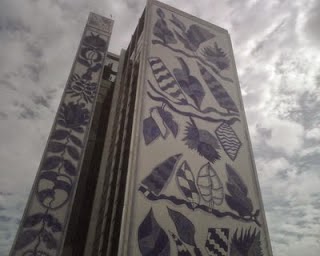 ...of a distant hereafter that can be triggered by this Illustrated Man building, an all-nighter teller of astounding stories of betrayal, cruelty, transpiration and shattered sounds of shaky galleons anchored at the humid coastline of the Malecon, with Don Facundo Bacardi standing between hallucinations of better times…

It’s not just that, is also declaring a vertiginous future with a myriad of images. Open scares with an incontrollable voice of hope.

Latin modernism at its best!

The 8-story tower was designed in 1963 by Cuban architect Enrique Gutierrez, who previously worked on Bacardi’s headquarters in Mexico City.

Miami's iconic Bacardi Building and  the adjacent Jewel Box (designed by local architect Ignacio Carrera-Justiz in 1975) were declared historic sites by the Miami Historic and Environmental Preservation Board on Oct 6, 2009 and  are a landmark of Midtown Miami.

On April 18, 2012, the American Institute of Architects' Florida Chapter placed the building on its list of Florida Architecture: 100 Years. 100 Places, as Bacardi USA.

Recommended reading: Bacardi and the Long Fight for Cuba: The Biography of a Cause
By Tom Gjelten
Posted by Luigi Seta I djLuigi at 7:15 AM No comments:

“Let me tell you one thing. In this world we are living in, 98 percent of everything that is built and designed today is pure shit. There’s no sense of design, no respect for humanity or for anything else. They are damn buildings and that’s it.
“Once in a while, however, there’s a small group of people who does something special. Very few. But good god, leave us alone! We are dedicated to our work. I don’t ask for work. I don’t have a publicist. I’m not waiting for anyone to call me. I work with clients who respect the art of architecture. Therefore, please don’t ask questions as stupid as that one.”

This, followed by the middle finger, was Gehry’s response to a reporter asking the 85-year-old architect how he responds to the critics claiming he practices “showy architecture.”
Originally covered by El Mundo and translated by Gizmodo, the awkward confrontation happened at a press conference in Oviedo, Spain, which Gehry attended to receive the Prince of Asturias Awards for the Arts.
Emotions may have been running high considering this past week Gehry celebrated the opening of the new Fondation Louis Vuitton building which the critics have claimed to be not much more than a “spectacle.”

Should I read that he and his work are the exception?
Evolution in architecture, like in other discipline or art, is not linear, it is more like a sinusoidal line, with periods that are empty of content and others ebullient, exuding creativity through its porous (e.g.: pre and after the two big wars). Because architecture as a  holder of the activities of the human being is not disconnected from our feelings and passions
And that’s my point, architecture is good, when is able to contain the in-habitant and/or the exo-habitant in a way of referencing all the scales, including the urban…. And if those users can develop its feelings, memories, wishes to dance or sing…in a few words, the magic of being happy… the purpose is satisfied. And that for me, is what defines good architecture.
So the judgment of good or bad, is relative to a very definite user or finite group of users (city inhabitants) that con enjoy or not the proposed three-dimensional space.
I am not worry about Mr.Gehry’s claims, especially coming from somebody that only in a few occasions took in consideration the people inside and/or outside of its buildings…
Looks like it is easy to fuel the ego when you have the connivance of big clients….
© Luigi Seta
Posted by Luigi Seta I djLuigi at 4:28 PM No comments: I remember being a young and romantic student of architecture and coming upon the just published masterpiece book of Architect Robert Venturi called "Learning from Las Vegas". To be quite honest I felt a mixed sentiment of both surprise and aversion. How could the art and the architecture of the "ugly and ordinary" be a matter of such study? What a terrible blow to we, the designers, on our spirited crusade for the dictatorship of the good taste!

Should we now be forced to join the Bad Taste Unlimited Incorporated, run by the governors of kitsch? At the time, the thought made me tremble!

So what exactly is kitsch?

Is kitsch the enemy of good design? Is it “bad art”?... Or maybe it’s a functional part of what is accepted today as “high art”?

The concept of kitsch became widely accepted during the second half of the 20th century, though the origin of the term is more complex. Kitsch came to us from Germany, its precise origin obscure, with many suspecting Yiddish input (a known wink from the shtetl.)

Kitsch is pretense…Yet not all pretense is kitsch. Something more, something involving you, the recipient of the sentiment, is required to create the sense of the intrusion (the unwanted hand on the knee) which kitsch achieves all so well! For kitsch is not just pretending, it is asking you to pretend along with it.

And touché! There is the revolutionary side of this movement!

Kitsch is an attempt to have the spirit of life… but on the cheap - a function of its irony. Often the sentimentalism or mawkishness it presents is an impudent invitation to deeply explore forgotten places inside ourselves. Therefore its value is in the kind of relationship it proposes, and precisely why some objects of design will appeal to the kitsch condition within every one of us: because we all , at sometime or other, envisage only the pleasant – refusing to see the unacceptable and tragic, both valid, if unfortunate, part of our lives.

So now you begin to see that there really are no kitsch objects, only a kitsch relationship; an intimate, unreal, and overly sentimental depiction of life which becomes an affair between the object and its receiver.

Until the arrival of the Pop Art in the 1950’s, kitsch has pejorative connotations. It then associated with the society of consumption…and soon began to appear in the depiction of common, everyday things. In this field is where kitsch found its real authenticity.

George Nelson, the exceptional industrial designer for Herman Miller, was also one of the most influential personalities in U.S. design during that period. His work concer Of course not even this icon of kitsch design made its entry into our culture so easily. The 1956 Herman Miller furniture read: "Despite its astonishing appearance, this piece is very comfortable", the company revealed a notable complex of guilt for this transgression to the modernist asceticism!

In the 1970s, kitsch expression gained a more respectful position, existing alongside accepted modernist styles. “Queen Anne”, the chair designed by Venturi, is a postmodern blending of these styles. Based on a chair designed circa 1790, its surface is decorated by playfully floral motif from a favorite tablecloth, imposed over diagonal stripes copied from the paintings of the artist Jasper Johns.
Such traditional floral patterns can be quite sentimental and thus antithetical to the modernist aesthetic. However, it is this very quality of sentimentality that appealed to Postmodernist Architects in their search for conventional images and patterns for use in a novel new way.

To rise above that which is merely bad, kitsch must have the quality of excess and a force of passion; it must have an energy manifesting itself in color, decoration or sheer blatant tackiness. Why some designs come to be regarded as kitsch depends upon the way in which they clash with the more established notions of good taste. But are those notions real? You decide.

So, in closing, my friends, I remind you that kitsch is as old as the sun and everywhere around us.

From time to time, allow yourself to be part of its kitchen and sink drama!